Does the total number of objecting submissions matter?

There were 232 objecting submissions to the Development Application for the motocross facility at Adare.  I doubt that any planning application in the Lockyer Valley Regional Council area has given rise to as many objections.

I've lost count of the number of people who have asked me questions along the lines of: "Why is it taking the Council so long to deal with this application if there were 232 objections?".

I can understand the the Planning Department is making sure that they do a thorough job of assessing all relevant aspects of the application and the submissions received, and I would not want them to do anything else.  Good governance is in all our interests.

Does the total number of objecting submissions matter?

Having regard to the number of objections and concerns expressed in the objections, Council considers that the proposal is contrary to community expectations and not in the public interest.

In case you are wondering, there were 179 objecting submissions to that application.  (The proponent later made a revised development application which was again refused.)

One of the other reasons given for the refusal that is relevant to the Adare motocross proposal was that:

The development will result in an unacceptable impact on rural character and amenity of the area.

Clearly an issue for anyone who lives in or has visited the Adare/Vinegar Hill area.

The property below is less than one kilometre* from the proposed motocross property and was photographed from a neighbouring property - pretty much fits the description of rural amenity in the quote from the Strategic Framework for the new LVRC Planning Scheme (which may be released for public comment at the end of April). 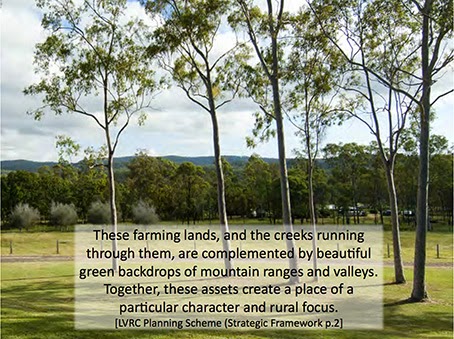 * I use distances from the edge of the proposed motocross property rather than from the Stage 1 track because the proponent has not given any indication of where the four additional Stage 2 tracks will be built.  It seems likely due to considerations of vegetation, slope and conservation values that they will be in the area closest to surrounding properties.
Posted by Data Hound at 23:13